If your listing requires updating please fill in this form or you wish to have your choir listed here, please email us on membership@singireland.ie for further details.

We rehearse every Monday night in the church at De La Salles college Waterford at 7pm till 9pm. Our MD is a young man named Damien Kehoe.

Our Repertoire includes Gregorian Plain Chant and Contemporary Chant, and also an eclectic mix of modern music and original arrangements.

Edmund Rice Choral and Musical Society is an all-female choir based in Waterford City singing for the entertainment of others and the enjoyment of themselves.

Through regular performances, sharing music with other groups and frequent social outings for members, ERCMS strives to promote the enjoyment of music for all. Rehearsals take place every Thursday from 7.45-9.45 pm in the Chapel of the Edmund Rice International Heritage Centre, Barrack Street, Waterford. For further information on ERCMS, please contact 087 9647231

We pride ourselves in being a non-conventional choir both in our teaching methods and choice of repertoire. As our name suggests, we love Indie music but we’re also prone to belting out the odd pop/rock/folk/disco/funk/bluegrass/americana/traditional etc etc song. Anything from Bowie to Bronski Beat and Neil Young to Orbital . Nothing is off the cards! Everything is taught by ear using participatory methods and our repertoire is both nostagic and current while also being a tad daring at times!! We are known for putting our own spin on some well known and not so well known songs with our original arrangements. We love performing live and recording . Since our humble beginnings back in October 2015 we have performed in many festivals around the country and also recorded videos with local and national artists and bands such as "In the Willows and Emma Langford . In 2021 we were placed in the top 30 indie covers for our version of The Stone Roses - She Bangs the Drums' . 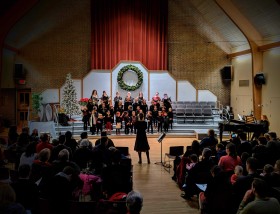 Harmony Children's Choir is a new singing group available to children between the ages of 6 and 14. Like its name suggests, this group strives to promote harmony through learning and performing choral music. Using solfege, rhythmic syllables, and kinisthetics as teaching tools, this choir aims to provide an excellent foundation in music, all through the joy of singing together. 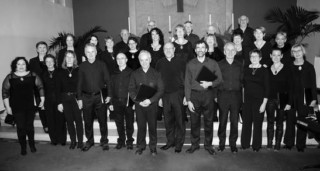 Madrigallery is a multi award-winning community chamber choir based in Waterford City with Dr. Kevin O’Carroll as its Musical Director since the mid-1990s.

The choir has a wide-ranging repertoire from earliest plainchant to works by modern composers, including pieces specifically created for Madrigallery. The choir is renowned for delivering high-end performances in collaboration with professional musicians and soloists from Ireland and beyond, with acclaimed productions of Mozart’s REQUIEM, Karl Jenkins’ THE ARMED MAN and Ireland’s first community choir production of JUBILATE DEO by Dan Forrest, to name but a few. The choir's long-standing commitment to excellence has made it a firm favourite with both audiences and reviewers. Most recently, Madrigallery won in several categories of the 2016, 2017 and 2018 Waterford News & Star Green Room Awards, securing the rare honour of topping the vote for "Choir of the Year", "Concert of the Year" and “Musical Director of the Year”. 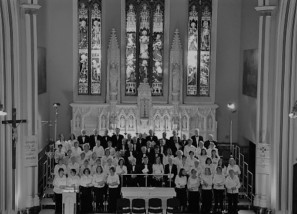 Notable Works was formed in 2017 with the purpose of staging large scale choral works in Waterford and the South East. It is a project-based choir in which choral singers come together each time for a well defined series of rehearsals leading to a performance.

Performances to date have included:

Handels’ Messiah (twice), Faure’s Requiem, a Holy Week event including part of Bach St John Passion, and Bach’s Christmas Oratorio. Our aim is to continue to provide performances of large scale choral works for the enjoyment of audiences in our region. 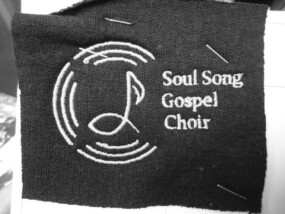 This choir began in 2013, it's a combination of all ages, Male and females, who meet for practice once a week.

We are a non profit choir and take part in local fundraising events. Although it is mostly a social gathering and we have a lot of fun, Ann puts her foot down when we have a social events. This group has brought a lot of different characters together whom now have become life long friends. 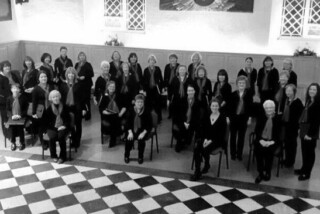 Based in Waterford, South East Ireland, Voci is a female voice choir founded by Anne Barry and currently conducted by Fintan Scanlon. Since its establishment in 2005, the choir has been contributing to the musical life of the city, giving recitals and sharing concerts with other local groups. Voci has had competitive successes at Arklow and New Ross Choral Festivals. The choir's repertoire explores a range of music from early polyphony to arrangements of light music and also includes music by Irish composers. The choir recently sang at the St. Patrick's Day Mass for the Irish Community in Rome and also performed in The Pantheon and Teatro Don Bosco. 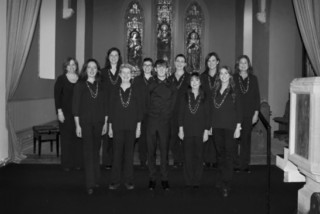 VoiceOver choir is a small dedicated group of experienced singers based in Dungarvan Co. Waterford who love to sing from popular to classical pieces.

From its establishment by Mary Lawless in Autumn 2014 the Choirs highlights include; performing on air as part of RTE Lyric FM’s Carol for Christmas Competition 2015 ;participating in the official ceremonies for Ireland 2016 singing our especially commissioned Centenary music, hosting an Autumn Concert with guest Soprano Cara O’Sullivan and singing solo and with massed choirs in Waterford Lions Club WLR FM Christmas Appeal Concert 2016. We practice on Tuesday nights from 7.30 – 9pm. Find and like us on FB.