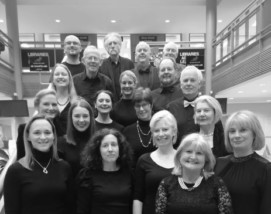 We are a mixed adult choir based in Dundalk and we perform a wide range of music from 16th to the 21st centuries. We perform locally, compete nationally and occasionally travel internationally (Rome, St Petersburg, Ulm, USA). Rehearsals are on Tuesday nights in DkIT. 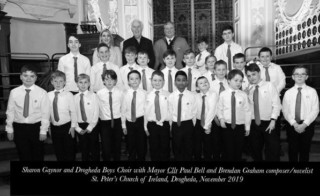 Drogheda Male Voice Choir formed Drogheda Boys Choir in September 2017 with Sharon Gaynor (Voice of Ireland) as musical director. The initiative to form the choir revived a long tradition of choirs for junior boys in Drogheda after a lapse of nearly fifty years.

It is hoped that the effort will help to sustain male choral singing in the town into the future. Drogheda Boys Choir is a community choir with its members drawn from about fifteen schools in the Drogheda area. Ages of the boys range from eight to fourteen years. The choir has a wide repertoire of songs. The choir staged its debut concert in November 2019 and launched a Christmas CD with proceeds in aid of a local charity.

Drogheda Male Voice Choir was formed in 2013 with David Leddy as musical director. Most of the almost fifty members have long associations with music performance in the Drogheda community.

This Choir gives audiences the opportunity to enjoy the special sound of the collective male voice in song. Our goal is to forge friendships between members in a totally stress-free environment and to develop relationships with other choirs throughout Ireland and Europe. We toured Wales, as guest of the Aber Valley Male Voice Choir in 2014; sang in

London’s Royal Albert Hall at the 25th London Welsh Festival of Male Choirs in 2016; and visited Rome in 2018 where we sang in St. Peter’s Basilica and at a private audience of Pope Francis. In addition to a number of public concerts throughout the year the choir performs at weddings, funeral and church services as well as events supporting local charities.

Setanta Choir is a mixed voice choir under the baton of Choir Director Una Murphy. The choir rehearses every Wednesday evening in The DKit, Dundalk from 7.00pm - 9.20pm.

Since its establishment in 1978, the choir has performed in many major venues at home and abroad, including the National Concert Hall, Dublin, and the Waterfront in Belfast with regular performances in Dundalk. The choir's repertoire covers a wide range of music; traditional, modern and classical. New members are always welcome. An ability to sight read is not a requirement but is an advantage. 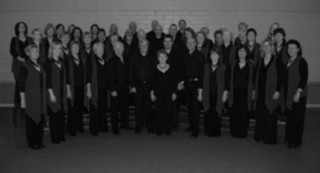 Tredagh Singers, originally St Peter’s Choral Group, was established in 1970 by Eugene Mooney. This mixed- voice large choir prepares large scale sacred music works for performance in the Drogheda area which are performed with the assistance of local musicians and solo singers.

Tredagh also performs an annual Christmas concert and regularly performs as guests at other concerts in the Drogheda area. the choir rehearses on Mondays between 8 and 10 pm in St Ita’s School, Drogheda and is very welcoming of new members.

Voices of the Boyne

Voices of the Boyne is a female-voice choir that emerged from a group of women interested in singing that responded to a Facebook post last year. They first came together in September 2018.